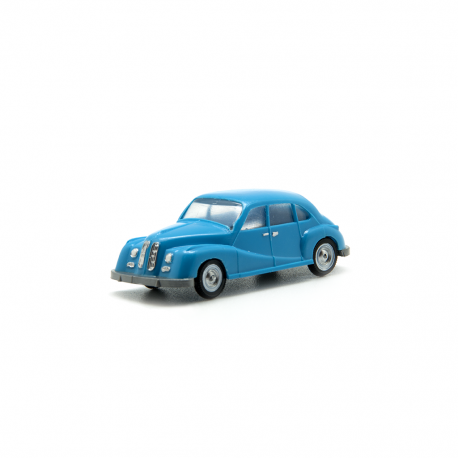 History and characteristics of the BMW 501

The BMW 501 was the first car produced by the German brand after the devastating Second World War that left this and other factories in a very difficult economic situation; however, they were able to withstand the situation and by 1951 this model was launched.

As soon as he made his debut on the market, the German public named him the "Baroque Angel" because of his powerful curves that defined his shapes very well, but it was not until the end of 1952 that the first BMW 501 cars could be sold.
The delay in production was due to the fact that the brand did not yet have the machinery needed to manufacture the bodywork, so they used a factory located in Stuttgart to make the panels and send them to Munich for assembly.
The BMW's 501 was a luxurious car for the time, it left the factory in two versions to the taste of the client, it weighed 1.340 kilograms, average height 1.53 meters, width 1.78 meters and length 4.73 meters, the curves were one of the most attractive features of the model, also chrome plated plates gave a special touch to the vehicle, as they were strategically placed on the edges of all glass.
A discreet front grille, round headlights whose edges were defined by thin chrome-plated plates, a bumper that was equally chrome-plated and discreet, a car that was clearly quite striking, full of details and ready to satisfy even the most demanding tastes.
If a customer wanted it, he could ask the factory for a convertible or coupé model.

A V-8 M337 502-1,6-cylinder, 2.6-litre 2580cc engine, which was attached to a manual four-speed gearbox, the steering was operated by a rack and pinion system, the front suspension was double spring while the rear suspension was equipped with a torsion bar spring shaft.
But this six-cylinder engine was not new at all, it comes from the 326 model that was used before the war, the maximum speed it reached was 150 kilometers per hour and developed up to 65 hp, to place it at 501 reinforced the crankshaft, redesigned the intake manifold and revised the cylinder head.
The safety of the occupants was the main characteristic of this car, as BMW was concerned about placing the fuel tank in a strategic and protected place to minimize the risk of fire, a robust frame that protected by all the angles of high impacts resulting from an accident.
But what mainly played against 501 was the selling price, which compared to its main rival Mercedes Benz was quite high; in fact, Mercedes had the ability to offer not only very good cars at a lower price, but also to provide its customers with a wider after-sales service than BMW could provide at the time.
Later on, the 501 evolved and became the 501 A, just after placing a total of 2,125 units on the market, since this car had great characteristics, such as moderate fuel consumption, comfortable to drive and a fairly efficient heating.
The 501A version appeared in 1954 and was introduced with a slightly more powerful engine than the previous one and with 72 hp, at the same time, the 501B version gave access to another number of customers, in both cases a total of 3,327 units were manufactured.
Later on, in 1955 the 501/3 arrived, of which 5,914 copies were made with an engine equally powerful, only with the torque increased from 119 to 127.5 Nm and a cylinder capacity of 2,077 cubic centimeters.
There was also a 501 V8 version at the same time as the 501B was manufactured, with a more powerful eight-cylinder engine reaching 100 hp.
The BMW 502 model is one of those that was derived from the successful 501 and greatly improved its predecessor, the same was released in 1954 and was characterized by being very luxurious, comfortable and expensive, so not everyone had access to it and the number of units sold the first year did not meet the expectations of the manufacturer.