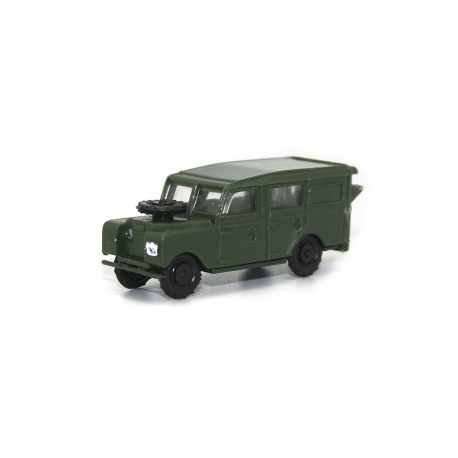 Military Land Rover, history of this car in Spain and features

Cars are usually made to transport people, goods and other functions, however, the situation is different when we think of a military cut vehicle.
These should be more resistant than everyday cars and provide more safety when used, being an off-road vehicle, so let's take a look at the history, features and other details regarding this type of car that was so popular in Spain.

Land Rover, its history and how it ended up in military enlistment

During 1948, this type of car was created with a high driving capacity, as well as great extreme strength, so it could fulfill two functions, as a car and as a tractor in rural areas.
Thanks to its heavy-duty traction system, it was in high demand, although its front end was still very reliable.
Already in 1950, small changes were made to the front axle, such as its manual connection and two-speed gearbox. Two years later a new version of this car was introduced and further changes were made, this time the emphasis was to expand its space and like the cylinders, which went to four in line for a load of two liters.
In 1956 a five-door model was introduced for more space and passenger comfort, so the engine was changed to a diesel engine. The success with this change became such that after 26 years no further improvements were made.
The Land Rover Battle, with a longer version and a size of 9 x 16, with large wheels, a turbodiesel engine of 2, 5 liters and four cylinders.
This increased the power of the vehicle, but it was still not enough, creating the IIIA forward control series that had more room in its new cab exposed above the engine. In this way, twelve soldiers could sit comfortably.
Speaking of military, it was in 1965 when the army showed interest in the IIA series, as it offered security as a large off-road vehicle. Its V8 petrol engine with 3.5 litres of light alloy alloy convinced the fleet to buy it and demand has grown ever since.
Four years later, the Santana military model was manufactured, which was later acquired by non-military' people and entered the market under the off-road range, all thanks to a suspension that included helical springs for a long distance, responding more effectively to the high speed of up to 170 kilometres per hour.
Powerful brakes are then fitted, a plastic grill is added to the radiator and it is only in 1980 that other mechanical changes are made; for example, engine versions are upgraded with crankshafts to increase the power of five counterweights.
In the same way and to overcome the resistance, the wheel hubs were redesigned and by 1989 the three-door bodywork was launched, being the first off-road vehicle with anti-lock brakes, breaking a record in sales at the time.
The model Defender has a 200 tdi engine and is also manufactured in its four-door version. In 1991 the five-door version called Discovery was released to be the protagonist for a while.
In 1992 the Range Rover LWB/LSE was introduced with a V8 and 4.2 litre tyre suspension.
It is very wide at the rear and its large doors allow easier entry and exit of people, this being the first prototype that contains electronic traction control.  It included reinforced headlights and a new safety system that made it possible to incorporate airbags for both driver and passenger.
The Spanish navy has benefited greatly from the introduction of these military vehicles to be able to enter places of difficult access. They are ideal for patrolling, maintaining order and preventing the entry of goods and people under suspicion.
Every day these cars are renewed with the introduction of new parts and current technologies that provide better driving quality.