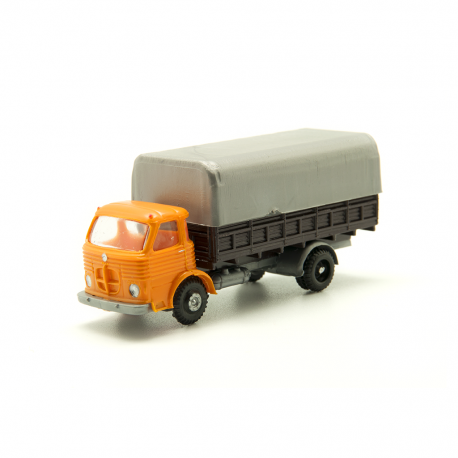 History and characteristics of the Pegaso Comet truck

After the sensation caused by the Barajas truck, a versatile versatile truck called Comet would soon enter the market.
For people who like vintage cars, we offer a little information so that their knowledge of the history and characteristics of this brand new 60's truck is useful and pleasing to you.

History of the Comet truck

In 1961, the firm Leyland created the Pegaso Comet, a truck whose objective was to launch advertising on products with the Pegaso brand and that's how they achieved it.
There was no objection to the success of this new creation called Comet, as an advertising caravan was then organized to show the units that were leaving and took all the dealers throughout the geography.
This innovative advertising campaign contributed to the knowledge of his new model in an effective way that caused great sensation. A novelty at that time was the placing of banners on trucks with their price to encourage buying.

The new Comet truck was a 4X2 engine, it could have a weight of 13,000 kilograms and run at a maximum speed of ninety-eight kilometers per hour.
Its 9020 engine had 125 horsepower steam at 2,400 revolutions per minute.
Its rubbers were specially designed for this model and its cabin was panoramic type with steel and a front window, being this the first truck to carry it.
The first vehicles had the dashboard in the middle, which no one else had. The plate and the cross placed in front of the radiator were also present.
These vans had as an extra accessory a cab of bodywork that allowed to be placed in large vehicles such as trucks and buses to carry out removals, being able to allow different uses according to the needs of the consumer. In this way the sales success was guaranteed with this model.
Then the tractors version called 2030 was chosen to add some changes, such as extending its chassis and a third single wheel axle after the engine, becoming a 6x2 and finally to finally get the commercial off-road version 3040.
The cabin offered ample space to be used as a vehicle in emergencies, as well as to transport equipment and workers to electrical and construction companies, among others. Another curiosity is that a bunk bed could be incorporated into its cabin, however, this characteristic could not be incorporated into the market by ENASA, as well as by specialized companies.
As time went by, the Comet truck became an indispensable part for companies of all types of commercial activity. This vehicle was most frequently used for earthworks and other works.

The Pegasus Comet was everywhere.

The Pegaso brand through its Comet was present in the Spanish armed forces and the civil guard. It became an official vehicle for general use, also having several types of demountable cabins.
These cars were used by the Ministry of Public Works to help in the maintenance and conservation of Spanish roads during the 60s and 80s and by then, the model was created on 1098, with an engine that came to have 135 horsepower of steam.
Then came the 1100 model in its reduced version with a 90-horsepower 4-cylinder steam engine.
Normal models were produced until 79 and model 3041 until 82. The last Pegaso Comet was made in 1982 with a specimen containing a square and folding cabin, they were not very different from those who participated in the palm operation but it had its indelible and personal stamp on the Spanish roads, as well as in the hearts of many people.
Vehicles were created during the sixties that increasingly allowed the incorporation of parts and accessories essential for the fulfillment of special purposes, by people who made this model one of the most sold throughout the Spanish asphalt.