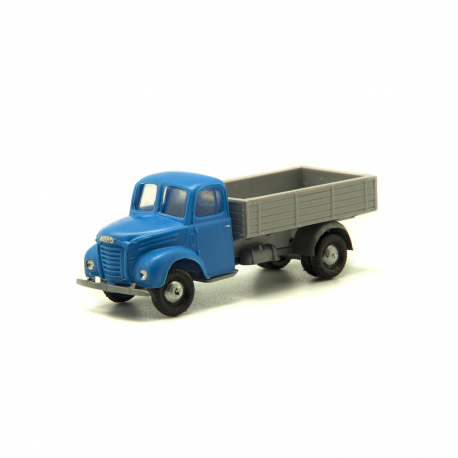 Perhaps for collectors, trucks are not classics of the history of vehicles, but they, like cars and motorcycles for today's generations, had a real boom for those who lived in the 1960s.
In Spain there was a real boom with all the features of the law and some models were so representative that it is worth remembering them today and also remembering their characteristics.
It is for this reason that in this post we are going to talk about the history of the Ebro b45 truck in Spain, as well as the most important characteristics.

Ebro b45 a true Spanish classic

In 1955 in Spain, a Ford subsidiary did not achieve the expected sales of vehicles and that is why a company called Motor Ibérica S.A. was born, which had as its objective the innovation of new models of trucks, but maintaining the commitments acquired by Ford.
Therefore, the truck infrastructure was a big risk that the company had to take and of course things didn't look too good. This is how a truck model called the Ebro B-35 emerged, which was launched the same year the company was created. This was considered as a copy of the Ford Thames ET6, however, and as this truck had an excellent acceptance, the company decided to risk to launch a new model the B-45, which was launched to the market in 1961, being born to become a true classic in Spain.

A truck of great utility for various activities

Although the production of these trucks came to an end in the late 1960s, their success had gone a long way, as they were used by several companies to carry out business-type functions.
One of the main functions of the B-45 was to load bottles, so it was the bars and restaurants that generally used this truck to carry out their distribution activities. This was one of the reasons why the brand of this truck is associated with this beverage industry.
In addition to being a bottle truck, the Ebro B-45 was used for other purposes as it was considered a versatile truck for the time.
For this reason, the different public and private organizations had the privilege of using this truck to carry out their activities. One of these cases was the Armed Forces that used this truck to transport the personnel of the organization, the firefighters and the Administration of Spain.

Characteristics of the Ebro B-45

The Ebro B-45 has the characteristics of a light truck in 4x2 layout and had a special English design cab.
This truck was designed to carry a payload of 9 tons and had a four-cylinder Ebro engine. This model had a version with cab, where the body could be opened in wood or with folding sides, also available in chassis-cabin.
Some companies renewed the physical characteristics of the truck, to such an extent that sometimes it was barely recognizable at first glance.
As time goes by and must evolve, Motor Ibérica SA began to build new trucks, so this truck stopped being built, but not before giving a great boost to the new models of the brand. But given its characteristics, it was a truck much loved by users, to such an extent that many of these models can still be seen well preserved.
This truck is remembered by its drivers as the"Ebro with a long nose", a definition that reminds and immortalizes this classic of all times.
The Ebro ceased to be sold at the end of the 1960s, but not without first leaving a tradition that we can still remember today, as this truck is the object of worship of collectors of antique cars and trucks.
Without a doubt, this truck was of great use to a whole generation of Spaniards who grew up next to it.