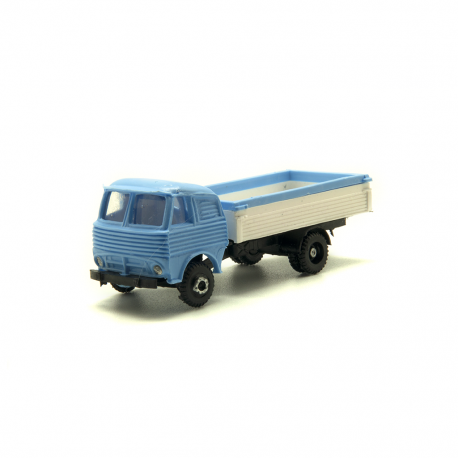 Pegaso shuffles the history of this truck in Spain and features

The headquarters of the Spanish company ENASA located in Barajas, Madrid, was where the Pegaso Z-207 Barajas was manufactured, a model that led the new designs of the factory and whose design was in charge of the engineer Wilfredo Ricart.

Thus, in 1956, the production of the Pegaso Z-207 Barajas began, a truck that was not at all related to its predecessors and stood out for its innovation and improved performance, in which a series of techniques without precedent in any other unit were applied, leaving the ingenuity of its creator in evidence.
Equipped with a six-speed gearbox complemented by an actuator that worked for both short and long distances, a 6-cylinder V engine at 110 degrees, diesel and whose power at 2000 rpm reached 110 hp and 120 hp in a short time.
But not everything was perfect at the beginning, the new Pegaso Barajas model was conceived with a weakness in the braking system, something delicate for a cargo vehicle that just had deficiencies when it was loaded with goods, a failure that gradually corrected with the adaptation of air compressors.

One of the components with which this truck debuted was so expensive to build, which was changed in the next version, is the chassis that was not completely straight and that housed the suspension engine and differential axle, were finally replaced by a straight chassis.
But the innovations in this model, which turned out to be very advanced by then, could cover any initial deficiency, we are talking about a truck that was very comfortable to drive on the rather uneven roads of the time and all thanks to the independent suspension of the front axle.
There were no loads that needed to be delivered urgently and that the Pegaso Barajas could not transport with the speed that the case needed, and all of this without any qualms about the time, whether it was day or night.
The high price of this truck made it inaccessible to users, who for little more than half the value could buy a Barreiro, the nearest competitor.
The evolution of the Pegaso Barajas was not long in coming and thanks to constant improvements, they launched the 1031 with a straight chassis and a capacity of 8 tons; even so, the Barreiros brand had reached a good position in the market and it was difficult to compete with the prices of the company's trucks.
It was then that the need arose to sign a pre-agreement with the British company Leyland, something that happened in 1957, and since then ENASA began to import certain models of the British brand.
The sunset of the Pegaso Barajas was approaching with the permission to manufacture the engine of the Leyland Comet model in Spain, giving way to the Pegaso Comet, the replacement for the Barajas.
ENASA was very confident that this new Pegaso model, the Comet, was successful, but it did not leave this premise to chance and they prepared a whole advertising campaign to publicize the truck that consisted of driving the first units in a caravan throughout the national territory to the respective dealers, all this supported by the media.
This idea undoubtedly had the expected effect and thousands of potential customers were able to get to know the new model and its versions, as well as the price which, by the way, and given the adjustments made in the production processes, was quite accessible and attractive.
Part of the success of the Pegaso Barajas replacement was directly related to the different sizes of the chassis, which was adjusted to the needs of the various users and hit the nail on the head improving the sale of units; it was also available in 4x2 and accommodated loads of up to 13,000 kilograms.
It kept some characteristics typical of the models that preceded it, such as the presence of the cross and the sheet metal in the part that precedes the radiator, however, the size of the cross was visibly larger than that of the Decks and the name given by the factory was Pegaso 1090, better known as the Comet.