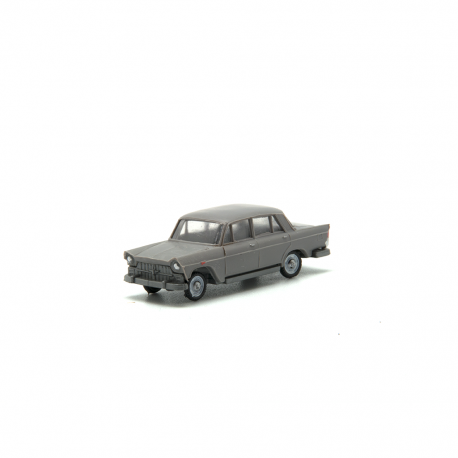 The Seat 1400 C model is a version of the 1400, a passenger car that was introduced in Barcelona under the Fiat license in the early 1950s and which undoubtedly marked the path of the vehicle industry in Spain, after a deep social and economic crisis, product of the postwar period.

This version was positioned as the family vehicle par excellence manufactured by Spaniards and for Spaniards, with certain competitive advantages over other models from other countries, in terms of price and specialized after-sales service.
The finish of the Seat 1400 C meets the expectations of the sober and demanding tastes of users, the doors fit perfectly when they are closed and this precision is evident in all the places where maximum safety is required.
Inside you can see how they have put a lot of effort into the small details that they were also willing to improve through the wide network of services that the brand has at their disposal.
The car comes equipped with a thermometer, a tape speedometer that is quite visually comfortable and which mistakenly marks a slightly higher speed than it is, which users have taken as a failure, has no clock but the conditions of the Spanish roads justify it.
As for the Seat 1400 C controls, they are considered absolutely ideal, functional, simple and provide agility in movement.
The comfort offered to passengers is not casual, the car was designed to provide comfort through the different resting points inside, made with materials that allow good rest over long distances and mitigate fatigue.
Spacious, clean and very comfortable, this is what the trunk of the Spanish Seat 1400 C family car looks like, without a doubt you can accommodate the luggage of about five people without any problems.
The car has a good starting speed, however, it becomes a little slower when the acceleration is direct and it recovers more efficiently with speeds above 10 km/h; the braking system responds without the need to press the pedal down, quite efficient.
As far as fuel consumption is concerned, it has been proven to be a fairly economical car and in any case when it increases it is related to the inappropriate driving of the car by the driver.
Broadly speaking, this 1400 C version is extraordinary, providing the user with good grip on the track, safety in sharp bends, it is very stable, brakes that respond correctly, smooth steering, the engine is quiet and the speeds respond very well, good damping, good power on the climbs, a car built without leaving details to chance and thinking about the comfort and safety of passengers and driver.
As a curious fact it is worth noting that even when it was called Seat 1400 C, this model was not exactly a version of its predecessors 1400 A and B and rather its characteristics were due to its kinship with the models of Fiat 1800 and 2100, At that time, they agreed with Fiat to manufacture a variant of these two models especially for the production of a 4-cylinder Seat with parts mainly produced in the Barcelona factory.
The new chassis was fitted with all the front components of the 101, the spring suspension remained true to its predecessor model and was fitted with the new 4-cylinder engine used in the special 1400 B, which was later replaced by another one also used by Fiat in another of the models.