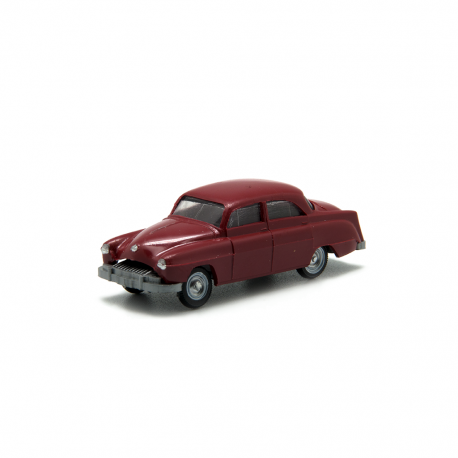 The Opel Kapitan was a luxury model of the German brand, whose first model emerged in 1938; this was the substitute for the Opel Admiral and years later was replaced by the Opel Diplomat.
The production of the Opel Kapitan finished in 1970 and reached seven different versions, among them were the Kapitan P1, P2 and A models that were the last. Precisely these three models of the brand turned out to be the luxury vehicles of reference in the 1960s and 1970s, to such an extent that they earned the use of the acronym KAD in honor of each other's names.

History of the Opel Kapitan

The Opel Kapitan, like the rest of the KADs, stood out for the complete equipment and the power of the engine, which perfectly combined with the modernity of the shapes.
Its boom began at the beginning of the year 64 and the following years the brand advanced through more advanced technologies that served to equip the new versions, which evolved to the class A and B series.
By that time, the brand made inroads with its Kapitan A 6-cylinder, 2.8-litre Kapitan A, which earned it a place in the Premium category of 64, followed by an almost exclusive series of just 113 4.6-litre V6 cars.
The brand's preoccupation was centred on the customer preference of these luxury models, so the designs followed the guidelines of the parent company General Motors, not in vain the critics placed them as modern cars with a renewed vision.

Features of the Opel Kapitan

Both the Kapitan and the other two models came out with a body that was 1.90 meters wide and 4.95 meters long, undoubtedly majestic and elegant for the time, but the model we are talking about today became the six-cylinder car with more sales in Germany.
Another of the outstanding features of the model was the front seat that could be moved forward and backward, which gave it the advantage and distinguished it from other models, as it accommodated one more passenger, then while the others housed five passengers given the individual front seats, this could comfortably transport six people and gave it a place to occupy in the luxury car segment.
In addition, the options offered to customers made it a very competitive model; a four-speed manual gearbox that came standard with a steering-wheel-mounted gearbox, which could be replaced by a sport-type ground lever or a two-speed automatic gearbox, front disc brakes and maintenance-free hydraulic boosters, a novelty in those times and reaching maximum speeds of 155 kilometres per hour.
The 113 special models of the Kapitan, equipped with a 4.6-liter V8 engine and mentioned above, were on sale in 1965, soon after they passed to a more advanced engine of six cylinders and 2.8 liters that stood out for having integrated a silent engine that achieved speeds of up to 170 km/h with 125 hp, surpassed by the version of 68 with a much more powerful engine with 140 hp.
A total of 24,249 units of the Kapitan A were manufactured until 69, from then onwards the new versions of the KADs involved much stronger engines and six and eight cylinders, dimensions a little smaller, focusing on safety, economy and comfort hand in hand with new technologies and improved designs.
The 2.8-liter versions with six cylinders and 132 hp, the 145 hp 2800 S, which stood out for its comfort and the 165 V, set the standard for the new generation of KAD cars Premiúm to enter the market with much more stylish bodies based on American preferences that made them look impressive.
The Opel Kapitan became a car much appreciated throughout Europe, Spain was no exception and the models were seen by their cities for years.