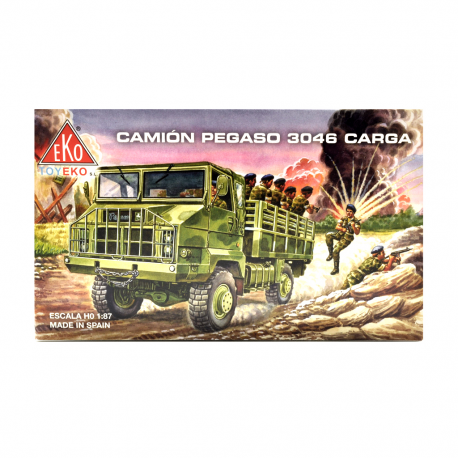 Pegaso 3046, the history of this truck in Spain and features

ENASA is a company known for the creation of cars and Pegaso trucks have all the prominence, being one of the company's best-known models. One of these, the Pegasus 3046 is one of these collection models and its birth had the goal of bringing the company out of the difficult economic situation it was in.

The Pegasus 3046 was born in the early 80's and has a military origin.

As we have already mentioned, in 1981 ENASA began to suffer a great economic crisis, as it did not have the expected business results, this translated into a significant deficit in sales that could cause the company to go bankrupt.
It is at this point that the company receives one of the most important requests in its history, which would help it to get out of the problems it was going through at the time. The request consisted of a contract from the government of Egypt where ENASA was in charge of the creation of a thousand 3046 trucks, which would be used as vehicles for military purposes in that nation.
This contract provided for the delivery of 13,000 trucks, which were manufactured by the Spanish company; however, they were not delivered in full as Egypt failed to pay for all of the trucks.
In this way, ENASA was left with 2,500 Pegaso 3046, which I later needed to commercialize in order not to lose so much money.
Despite the company's efforts to market this military vehicle, it is not able to do so internationally. There was an attempt through a contract with Sudan, which made ENASA manufacture more trucks, but could not close the purchase of them.
In this way, ENASA is left with more trucks and more economic problems that it needed to solve.
As time went by, a new sales opportunity for the Pegaso 3046 was created, and the company signed a contract with Civil Protection to deliver a significant number of these units. In addition, important projects were carried out to provide trucks for the Territorial Public Administration and to use the Pegaso 3046 to save people's lives in places with fires.

The agreement between ENASA and Civil Protection included providing Pegaso 3046 trucks with the necessary elements to counteract the effects of fires, in accordance with Civil Protection requirements.
In this way, the fleet of 3046 models was renewed and equipped with the necessary fire equipment to become a fire truck.
Large numbers of trucks of this model were reused as forest auto-pumps and when the fire or any other emergency arrived, it was very common to see them move quickly through the streets. Although it is a classic truck, the Pegaso 3046 can be seen in Spain in a variety of fire stations performing the same function, the task that made it one of the best known trucks throughout the country.

This truck is built with a 9135 diesel engine of 170 HP at 2,100 rpm, runs on four-stroke, six-cylinder turbocharged engines.
In the same way, the gearbox is equipped with six speeds that are synchronized forward and backward. Because the military purpose of these trucks was not fully met, most of these vehicles have forest auto-pump bodies.
The Pegaso 3046 has become the fire fighting truck and its main benefit is that it is an economical truck that does not require much maintenance and is of great help to the population. The versatility of this truck allows multiple uses, but always intended to help people.
This truck was a financial solution for both its manufacturer and the different institutions in Spain.